RxCelerate is an early-stage drug discover platform. The team design and deliver integrated programmes to drive an asset through discovery, preclinical research and beyond. RxCelerate specialises in tailored design with data-rich endpoints, which maximise the chance of a drug reaching the clinic.

When RxCelerate decided to move to a new building, they chose Babraham Research Campus in Cambridge, which was a completely blank canvas for them.

As RxCelerate’s Financial Director Nick Tate puts it, “we really wanted to put our stamp on this building, and make it feel like a flagship headquarters that was truly our home.”

Nick and the senior team at RxCelerate sat down with Optry’s Mark Perriton, to understand what the requirements for the project were and how those ideas would translate once the project got underway.

Once RxCelerate signed the lease to their new headquarters in December 2019, they wanted the space to be something uniquely their own, completely fit-for-purpose, with enough room to continue to expand, and these were their key requirements for the finished product.

They wanted enough meeting rooms and office spaces for different functions, which is when Mark suggested taking a trip to London to pick out the right furniture for the project.

“The first thing we really launched into was the furniture, primarily because Mark wanted to get me down to London and thinking about furniture. This is because a third of the costs were furniture, and prices tend to rise annually, and by doing this when we did, Mark saved us 5%.”

The building itself is a contemporary open-plan office with labs, so the visual impact, branding and design features were all required to really emphasise the branding to avoid any of the stereotypes that are usually associated with scientific establishments.

Once the architectural project was completed, the Optrys team, in conjunction with Meridian Interiors, were able to move in and begin putting into place all the features that were discussed during those early design meetings.

As previously mentioned, Nick, was keen to place extra emphasis on the board room, as he explains, “we’d never had a proper boardroom before, and it’s a great way to impress current and potential customers.”

By nature, many of the conversations that take place in the board room are confidential, so Mark suggested a privacy screen that can be operated using a switch. The privacy screen is similar to a thick piece of acetate, so once the switch is flicked, a current is sent through the screen to turn it from transparent to opaque. This meant there was no need for blinds, which are prone to breaking and require frequent cleaning.

The breakout area was an essential point of consideration during the design phase because RxCelerate were keen to avoid the corporate theme that runs through the rest of the building.

“We wanted the breakout room to feel like a fun and relaxing space, and we deliberately didn’t want to make it too corporate,” said Nick.

The designated breakout area had a lot of blank white space, which isn’t conducive to a relaxing space. This is why the team at RxCelerate put together some ideas so an artist could come in and create spectacular mural, which included scenes from Cambridge history, science and some famous figures from the scientific community, amongst other things.

“The workmanship has been very good, Optrys got everything done quickly, all finishes are great, and the building feels more like our home, which is a huge benefit for the feel of a company,” explains Nick.

During the project, Mark and his team, paid particular attention to lighting and furniture, to ensure the space is comfortable, fit-for-purpose and well-finished.

“We built in the branding and identity in terms of finishes and the graphic treatments in the space. And then we liaised with the contractors to ensure we delivered the building on time and in budget.” Says Mark.

When asked about his opinion on working with Optrys, Nick said, “Mark and Julia were very good-natured, very professional and communicative, and everyone loves the building.” 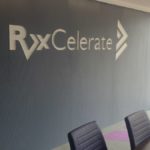 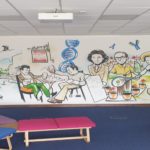 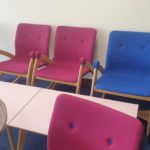 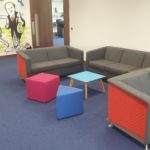 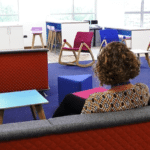 Working with Mark and Julia was very enjoyable. They are both very professional, they communicate very clearly, they respond very quickly and overall everything ran very smoothly.

Ready to get started on your dream workplace?