Endurance Estates are a vibrant property development company who have successfully attained planning permission for over 3,000 new homes and completed over 8 million square feet of development projects worth more than £2 billion.

Endurance Estates had been discussing the possibility of refurbishing their office for some time. Even to the point that a few different companies had been into their office to measure and discuss how the building could be utilised more efficiently. However, they felt that they weren’t able to meet their ambitions.

Jodie, the office manager, was tasked with finding a company who could operate on a bigger scale and could ultimately transform the entire space. After some a quick Google search, Jodie came across Optrys.

When Endurance Estates were established, the director and the financial director worked together in one room. As the company approached their tenth anniversary, their rapid expansion meant they were now having to make use of the entire building.

The space as a whole was looking a little tired, there had been no consideration of office design and the space lacked atmosphere. Ten consultants were now sharing an office and the meeting room was no longer fit for purpose. The team decided it was time for a change, which would necessitate the construction of a new layout.

The initial conversation was about moving offices, but since office space in Cambridge is at a premium, moving was not something they wanted to do. Instead, Endurance Estates decided to maximise the potential of the current office to make the space work for everyone.

Tim Holmes, the director of Endurance Estates, has a background in chartered surveying and was able to come up with some ideas on how the space could be used more efficiently, and Optrys helped develop those ideas into practical solutions.

The building itself was once a printing press and a residential property where the manager lived, so the building is not a standard build, which meant it would be quite a challenge to apply the ideas that the team had.

Previously the boardroom was upstairs, which was inconvenient for visitors, and downstairs was a large kitchen that wasn’t being utilised. Endurance, needed the board room to be moved downstairs and wanted the kitchen to be made smaller and modernised.

Once Optrys met with the team, we were able to offer opinions about his vision on how to transform the space, which is the direction that Endurance ultimately decided to progress.

The large kitchen was condensed into a smaller, contemporary kitchenette, so when visitors come for meetings, they can sit comfortably before entering the new board room.

As well as all the cosmetic changes that have been made a more efficient lighting scheme has been installed as well as air conditioning to the offices.

All of the support staff have now been moved upstairs, and refurbished, which means that visitors no longer need to go upstairs for anything, and the benefit of the team all seated together.

While the refit was taking place Endurance Estates were also undertaking an extensive rebranding project, which meant new logos and colour schemes, which were utilised as part of the new décor.

Tim Holmes’ family have close connections with the plighted Shackleton expedition at the turn of the century on the Endurance ship, therefore the whole interior decoration scheme followed a sympathetic nod to the resilience of the Endurance crew and their expedition in Antarctic – this was reflected in vinyl wallcoverings of icebergs and the design of the boardroom in terms of décor and lighting .

Overall, from start to finish the process for Endurance Estates took place over two years, but once Optrys were hired the entire overhaul took only six months.

Everyone at the company is far happier with the office they have now. All the staff were able to get involved to offer their suggestions, most of which have been implemented.

The new reception area is the most significant change for Endurance, previously it was quite an unwelcoming space, with a sealed-off door that was reliant on people opening the door rather than being buzzed in.

Now the front door has access control, which means guests can be buzzed through and they can make themselves comfortable, enjoy a coffee and a chat before being led into the boardroom.

This complete overhaul has not only improved the environment, but it has also helped to improve the atmosphere among team members and even has them socialising with each other more frequently due to the warm welcoming space. Furthermore, as a result of investing in LED lighting and new air management within the office the electricity bills were reduced by 40%. 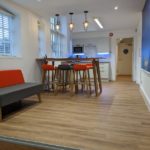 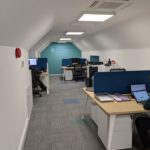 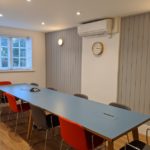 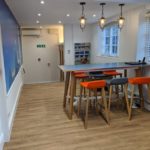 Everyone is really happy with how the office looks now; it has a much more pleasant, welcoming and social feel to it

Ready to get started on your dream workplace?